Greenwich was recently revealed to be one of the top ten most sought-after London boroughs by Zoopla, with the volume of enquiries 28% higher than the London average. Thanks to the launch of London Help to Buy, first-time buyer Jamie Mead (27) was able to purchase a brand new one-bedroom apartment in the borough, at the popular Greenwich Millennium Village, SE10.

Jamie, who works in structural engineering, had been living with his parents in Canada Water while he saved for a home of his own. He says: “I had been saving for a while, and had actually been house-hunting for around two years when I came across GMV. When I first started looking, London Help to Buy hadn’t yet been introduced, so I was considering moving to the outskirts of Greater London in order to find something within my budget.”

“I’d seen properties in places like Romford, but I just wasn’t keen on the idea of moving so far away from my family and facing a much longer commute. I then discovered GMV just as London Help to Buy was launching, after my mum went past it on the bus one day and suggested I have a look. I went to see it and a couple of days later I had reserved the plot, as demand was high and I really didn’t want to miss out.”

The location is fantastic; it’s so central, and my commute to Tottenham Court Road is really quick and easy. Everything you could need is close by, with The O2 on your doorstep, and lots of shops and restaurants. The ongoing regeneration of the Greenwich Peninsula is exciting too, as it means it’s going to keep getting even better.

GMV is a joint venture development by Countryside and Taylor Wimpey, supported by the Mayor of London, and has been described as one of the most exciting and innovative residential neighbourhoods in Europe. Residents at Greenwich Millennium Village can take advantage of a huge amount of green open space with landscaped courtyards, a 4-acre ecology park with two lakes and thriving wildlife.

Jamie comments: “I knew I wanted to use the Help to Buy scheme, so I’d looked around a few new build developments, but the standard at GMV is much higher than the others I’d seen. The quality of everything in my apartment is fantastic, especially the kitchen and bathroom. My neighbours are great too, we all went out together and even have a WhatsApp group! It really feels like a community.” 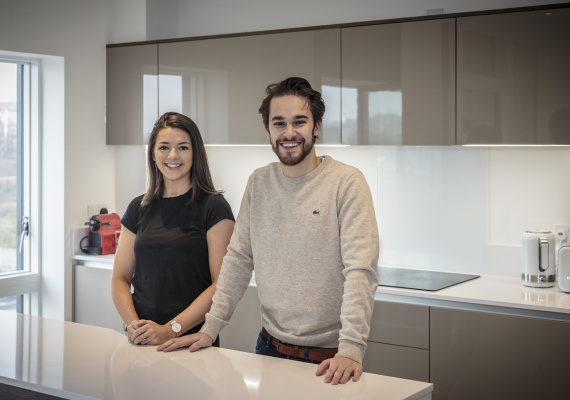 BUYING COULD BE EASIER THAN YOU THINK AT GREENWICH MILLENNIUM VILLAGE